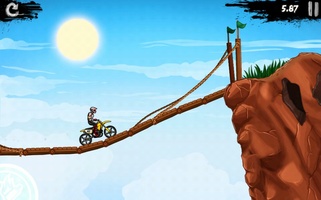 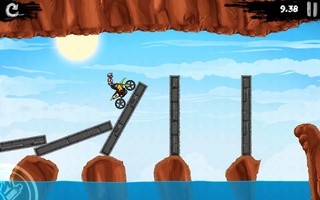 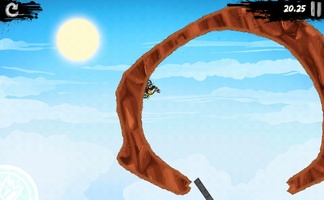 Advertisement
Bike Rivals is a 2D motorcycle racing game where your aim is to try to get to the finish line as fast as you can, all while dodging bizarre obstacles that pop up along the way.

The bike's controls are very intuitive: you accelerate by pressing the right side of the screen, brake by pressing the left, and lean the bike from one side to another by tilting the Android device itself. Using these controls, you'll have to get to the finish line as fast as you can.

The main problem you'll find on Bike Rivals is that the levels aren’t precisely flat. On all the game's levels you'll find crazy jumps, loops, and even a trap thrown in here and there. Sometimes, for instance, you might get a giant rock following you in pure Indiana Jones style, forcing you to use turbo in order to make it out alive.

As usual, though you'll have only one bike available at the beginning of the game, you can get many more as you play on. From a pizza delivery bike (which you can get by clicking Like on Facebook), to the bike from the movie Tron (quite a lot harder to get).

Bike Rivals is an outstanding 2D racing game. And that's mainly because, in spite of all the competition out there, it manages to stand out thanks to its brilliant graphics and the very fun design of the levels.
Reviewed by Andrés López Translated by Stanislav Sousek

The game in the beginning is good, but I have a problem now that the first was running along and after I did such a time, the software and I told her that it will automatically graduate from itself by...

Bus Simulator : Ultimate
Run a bus company and plan routes around the world
Dr. Driving
Drive carefully around the city
Extreme Car Driving Simulator
Take your car to the limit in a realistic environment
Angry Birds Go!
Angry Birds characters star in a racing game
Asphalt 9: Legends
Drive at top speeds through streets all around the world
Traffic Rider
Get on your motorcycle and whizz at top speed through traffic
Asphalt 8: Airborne
Spectacular races on your Android
Real Racing 3
The most realistic simulation on an Android terminal